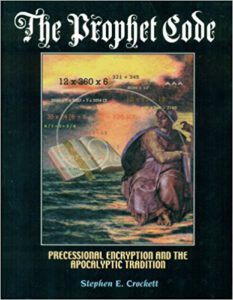 First published in October of 2001, this astounding work on the Christian prophetic tradition was written before the events of 9/11/2001 and accurately predicts and identifies key moments in the apocalyptic timeline. By comparing precessional codes found in Ezekiel and St. John’s Revelation, Stephen E. Crockett was able to pinpoint the date of September 11, 2001 as the First Horseman of the Apocalypse months before the World Trade Center terrorist attack.
The Prophet Code: Precessional Encryption and the Apocalyptic Tradition painstakingly describes the art and practice of precessional encryption, the original sources of this rare science and the method by which its authors wove numerical data into Biblical prophecy. It is without question the foremost authority upon the ancient art of numerical prophecy and leaves no doubt as to the perilous times in which we now live. Only when we fully understand the schedule of apocalyptic events now unfolding around this planet, will we be able to prepare and quite possibly avoid the impending time of trouble.
And only The Prophet Code: Precessional Encryption and the Apocalyptic Tradition provides an apocalyptic schedule of such proven accuracy. In the year since its publication, events in the middle east and elsewhere have more than demonstrated the importance of this earth shaking book and the accuracy of its apocalyptic timeline.