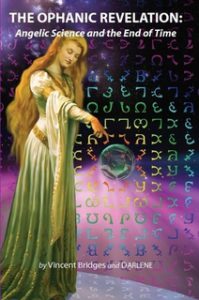 Four hundred years ago, higher intelligence in the form of angels communicated a geometrical, symmetry-based, DNA-coded language pattern capable of producing a rapid expansion of consciousness and an increase in symbolic cognition. This shift in awareness–from a local primate-0based consciousness to a much larger, universal, non-local reality–is based on what we now call plasma physics. The angels gifted us with this most unusual language system as a kind of life raft/survival radio set as they knew mankind would need a shift in consciousness to survive the precessionally timed apocalyptic season that now threatens to close in upon us. This book represents the first serious attempt to examine the angelic, or Ophanic, system given to Dr. John Dee from multiple viewpoints, using history, physics, biology, mathematics as well as art and sacred geometry to explore the unexpected depths of meaning and interconnection in this unique communication.

Information and picture from Lulu.

Preface: Who are the Ophanim and why are they following me around?